Grant Macdonald is an esteemed silversmith of international repute. He began his career in precious metals at the age of 14, he attended a pre apprentice course at the Central School of Arts and Crafts finally graduating from Sir John Cass School of Art.

The Grant Macdonald business was established in 1969 and became a limited company in 1977. The business is still thriving and has had is base in Bear Lane, London for some 41 years.

Over a career spanning some 50 years the Grant Macdonald brand has worked in every aspect of the trade to the heightened areas of bespoke high value luxury, developing a reputation second to none in the global marketplace.

Highlights of the international silversmiths’ career include the 1998 remake of the 6.4 metre high Orb and Cross for the Dresden Frauenkirche installed in 2004 which was presented by the Duke of Kent to the City of Dresden to commemorate the millennium and over fifty years of peace.

Over 90% of pieces designed and created in-house by Grant Macdonald are exported. Grant’s company was the first silversmithing company to receive the Queen’s Award for Enterprise in International Trade in 2006. He has formally been the Master of the Barbers’ Company in 1999 and was the Prime Warden of the Goldsmiths’ Company in 2008. In 2016 the company was awarded a Royal Warrant from HRH The Prince of Wales as Goldsmiths and Silversmiths. He answers the Benchpeg Q&A... 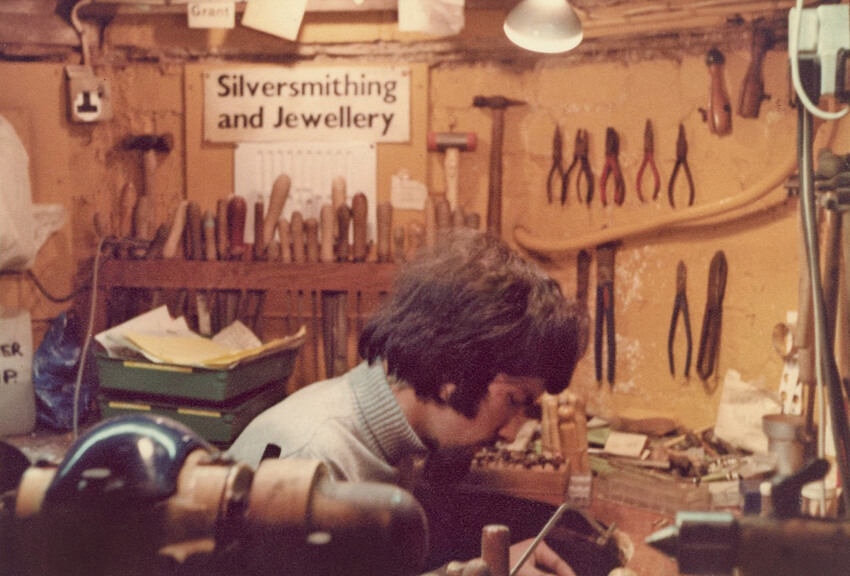 Grant Macdonald and I am a silversmith. I started my workshop in 1969 after a pre apprentice course at the Central School of Art and a diploma course finally graduating from the Sir John Cass College School of Art. My first workshop was in Palmers Green in north London followed by Clerkenwell where the workshop overlooked the now Goldsmiths’ Centre. My current workshop for some 41 years is in Bear Lane near the Tate Modern on Bankside.

My Father introduced me to someone who had a hobby making pieces of silver. At the age of 14 I made a silver spoon which I still have. Attending art school inspired me to train as a silversmith and then to start a business.

The pieces we design and make are very varied. We have a very healthy export business of some 95% of our sales so our designs are market dependent which gives us a wonderful opportunity to produce different pieces. I have always made it my business to export starting way back in 1972.

We design and hand make excellent quality pieces mainly for the table and presentation gifts. We also specialise in making badges and pieces for the London Livery Companies. 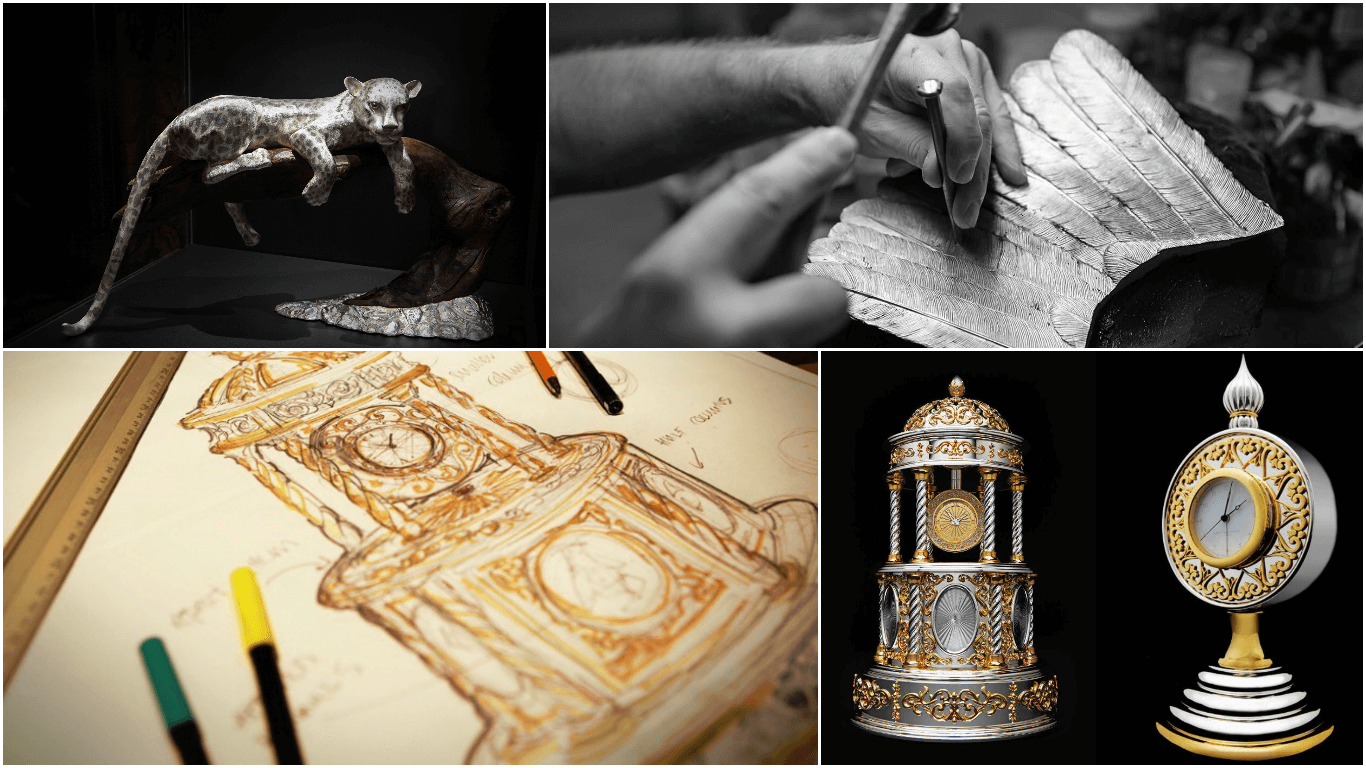 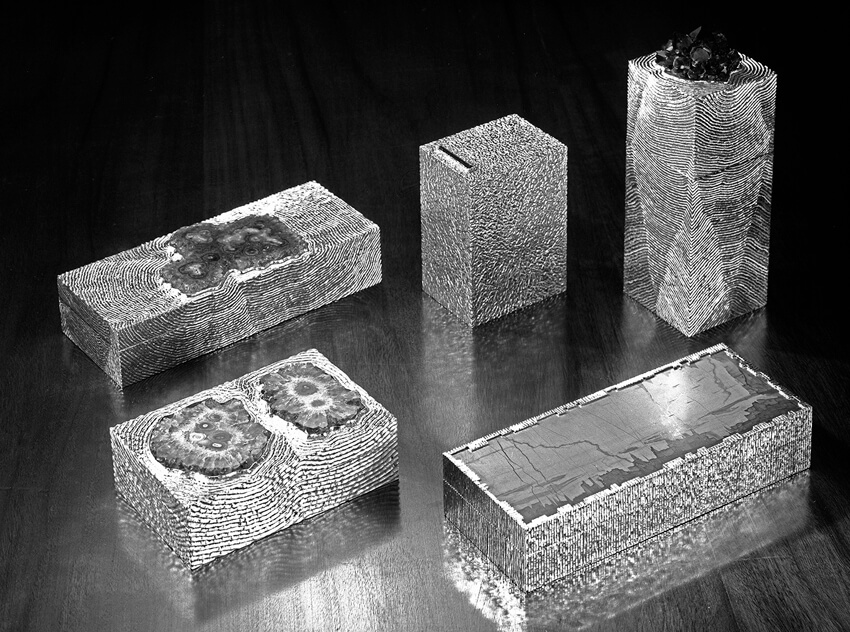 Some early silver boxes made by Grant

Perhaps it could be described as necessity over a time line. The workshop needs work and plenty of it. Both my son George and I travel the world seeking new commissions and designs. I do not have a design theme that runs through my work and never have, I design pieces that customers want to buy not pieces that I want to sell. I firmly believe that “good design finds you” and I think the more pieces you design and make the better

better you get at designing and making. Meeting someone, talking to someone, needs to be turned into an opportunity if your head is in gear and you are listening. In our craft/industry you have to have an entrepreneurial spirt to go with the skills you have learned. Designing and making are both wonderful assets but if you cannot sell yourself, how can you sell your pieces. Whatever is said about the internet or being a brand please consider that “people enjoy buying from people”.

I do not love to shop but I seem to find myself in too many duty-free shopping malls for comfort!

Survival of the business and leaving something behind that will stand the test of time as good design and wonderful craftsmanship.

I have a cream jug made by the great Paul Store in 1837, part of a dinner service my grandfather inherited.

What piece of jewellery do you most desire?​

A piece by Rod Kelly or something enameled by Fred Rich, both amazing stars in our craft.

Is there a seminal book or a favourite read that you have?

Is there a particular tune, song or soundtrack to your life?

Growing up through the sixties the music ran through our veins perhaps now music is just something playing in the background of my life.

If you could only be remembered for one thing in your working life, what would it be?

Trying to be the best of the best. 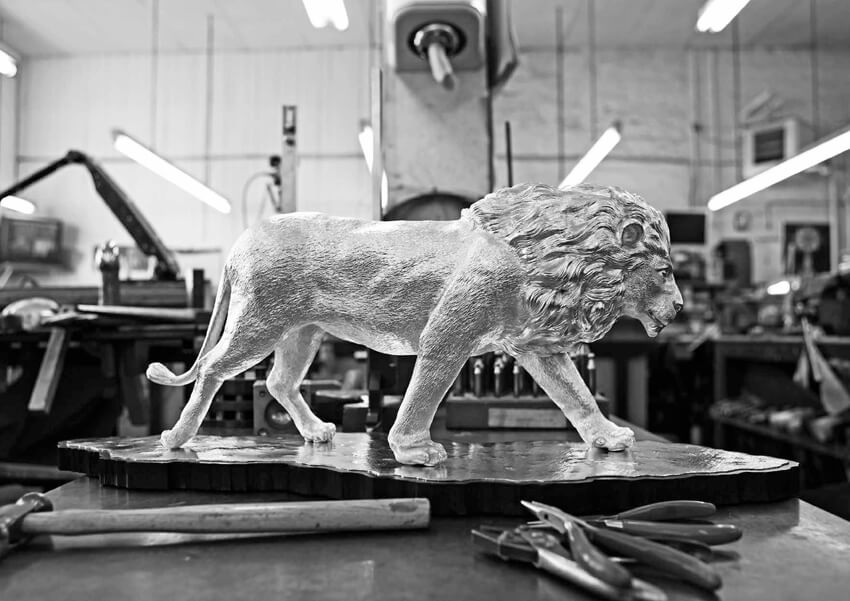 What would be your advice to someone starting out in the industry?

It’s a crowded market place, so you will need to stand out to be successful, don’t think that just because you have a website you have business. Try to set out a plan looking at your overheads, get your selling prices right. Lastly, never say NO to an opportunityhowever big or small!

Grant Macdonald has work currently on display in an exhibition entitled Grant Macdonald: International Silversmith which is a retrospective of his 50 years as a working silversmith.

Grant Macdonald can be found at: