This September Dazera launched its first competition to reward the artistry of fine jewellers. “Jewellery is often appreciated most for its fine gemstones and exceptional craftsmanship, but much more rarely for the creative thought that has gone into it,” explains Dazera founder Domini Hogg. “The aim of the competition is to highlight the creative talent out there.”

This September Dazera launched its first competition to reward the artistry of fine jewellers. “Jewellery is often appreciated most for its fine gemstones and exceptional craftsmanship, but much more rarely for the creative thought that has gone into it,” explains Dazera founder Domini Hogg. “The aim of the competition is to highlight the creative talent out there.”

Not all jewellers are artists, but there are a few who undeniably are. Some, like JAR and Rene Lalique, have been recognised by national museums with entire exhibitions, but many of them are difficult to find, known only to connoisseurs and collectors.

Dazera was born out of Domini’s desire to help creative designers like herself. “It’s not easy being an artist jeweller.” Domini tells us. “People often think that because you are selling fine jewellery, you must be making a fortune, but it’s not like that. Unsurprisingly the materials are expensive, and the financial pressure to maintain a premium brand can be high.” Unlike in the art industry where artists frequently rely on artist agents to market their work through galleries, artist jewellers often end up trying to market themselves. And most artists will tell you they find marketing themselves extremely difficult.

When asked why she was attracted to jewellery design, Domini explains: “Jewellery is like a miniature canvas in precious materials. It has all the potential of fine art yet with additional challenges: the wearability and the size of the finished artwork, and the properties of the materials that make it. It forces me to express myself more succinctly and imaginatively.” Dazera’s competition is designed to encourage jewellers doing exactly this.

To best judge the competition entries, Domini asked jewellery experts Katerina Perez and Rachael Taylor to score each entry according to three main criteria: originality of design, ability to express and communicate an idea, and quality of craftsmanship. The judges were chosen especially for their knowledge and passion for creative fine jewellery.

Katerina is a trained gemmologist with an eagle eye for detail. Growing up in an artistic family, her love for jewellery naturally tended towards the more creative. Now she travels the world scouting out talented jewellers and judging international jewellery competitions including Couture, Las Vegas. Rachael has her finger constantly on the pulse of the jewellery world, writing for international newspapers and magazines, judging the UK jewellery awards among many others, and acting as Trend Editor for International Jewellery London. She has a curator’s knack for picking out the most interesting designs around. Both Katerina and Rachael are delighted to be able to support the work of these talented artist jewellers. “The quality of the entries has been very high” says Rachael.

The judges picked out their top three winners as:

In first place is Max Danger’s “The Weight of the World On Our Shoulders” ring. 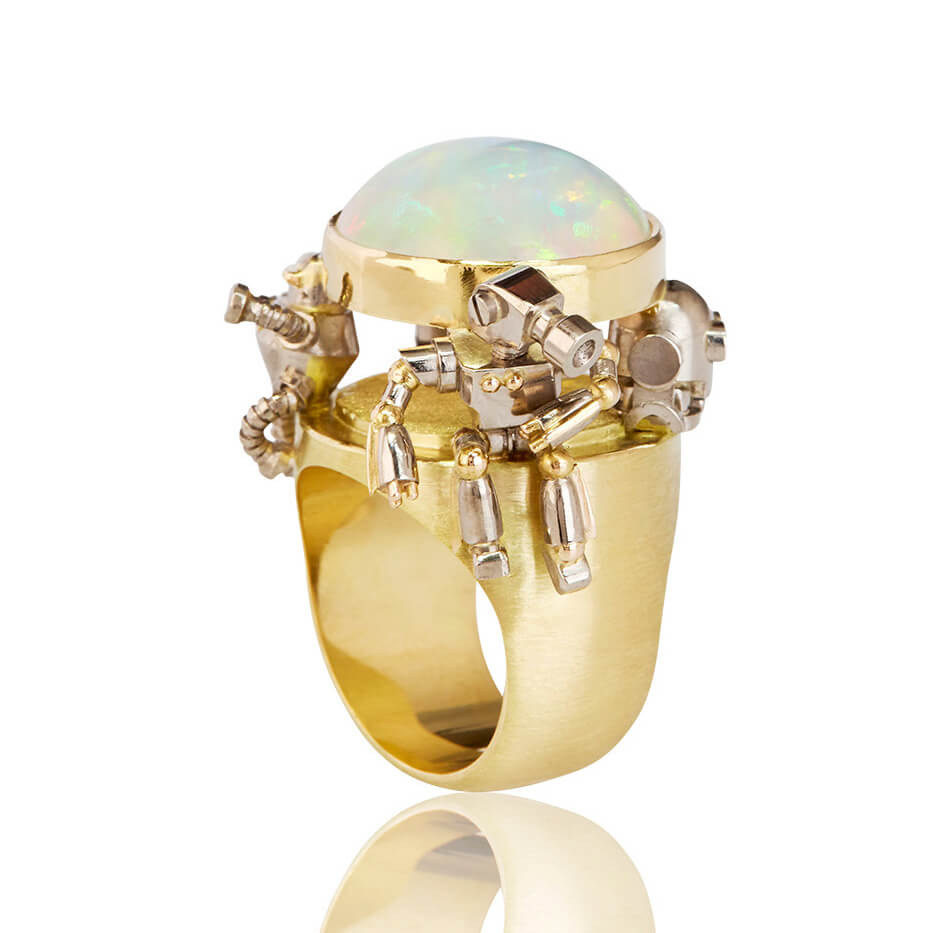 “Max’s ring is a real work of art. Beautifully made from more than one hundred different pieces and extremely expressive, it calls on the mythological story of Atlas holding up the world on his shoulders to succinctly communicate concern for our increasing reliance and dependence on robotics to function as a society. The juxtaposition of the modern and the ancient world makes the piece all the more poignant, with the stunning opal suspended at its centre as if awaiting its fate. This is a jewel like none other and is well-deserving of its prize.” 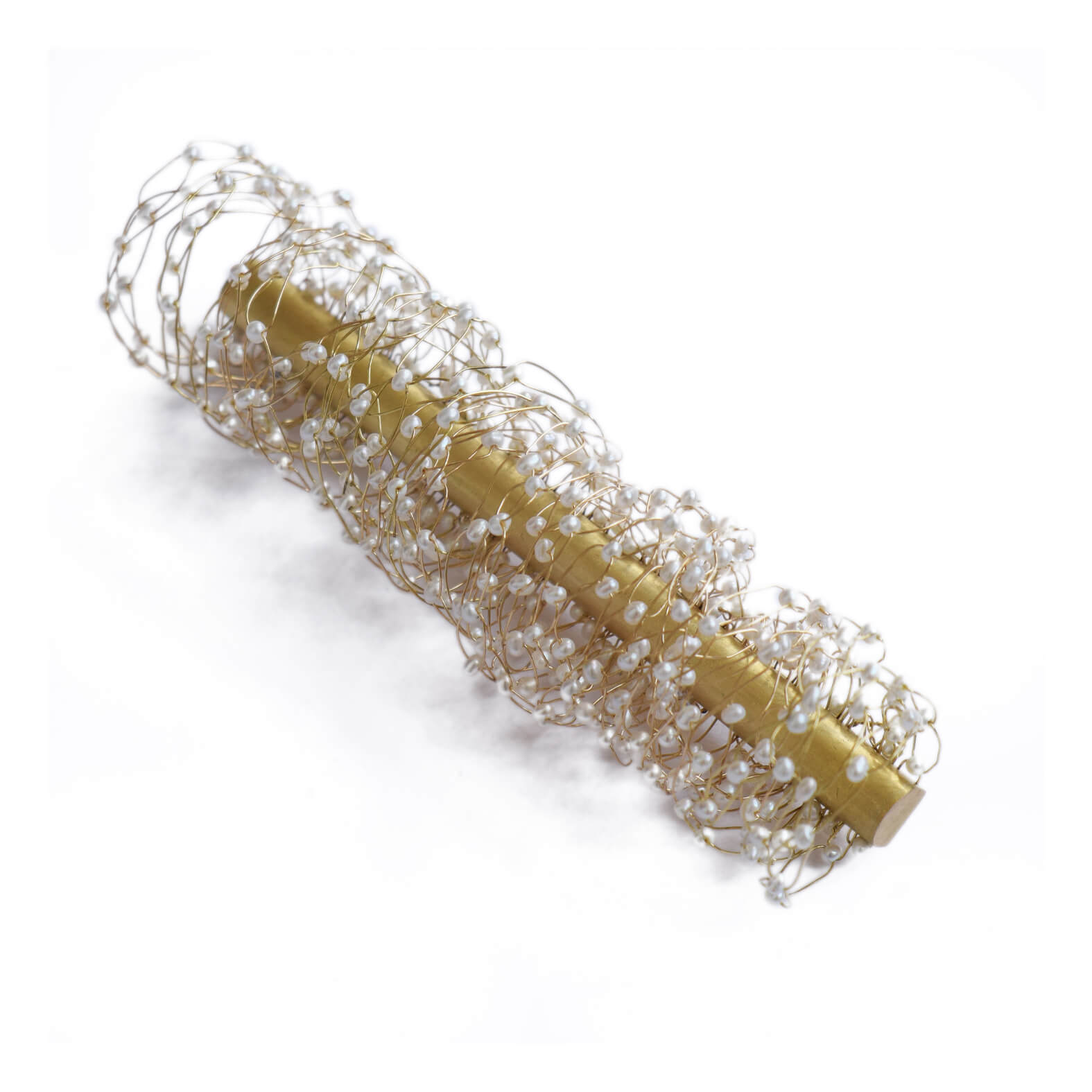 “Kayo set herself a real challenge in trying to recreate something as intangible as mist, yet this brooch has somehow captured the light, airy and magical beauty of a delicate winter mist. Its abstract shape draws attention to the shapeless infiniteness of the weather phenomenon, while the tiny seed pearls floating on a mesh of gold reflect its scientific composition. It is a wonderful reminder of how science can create magic.” 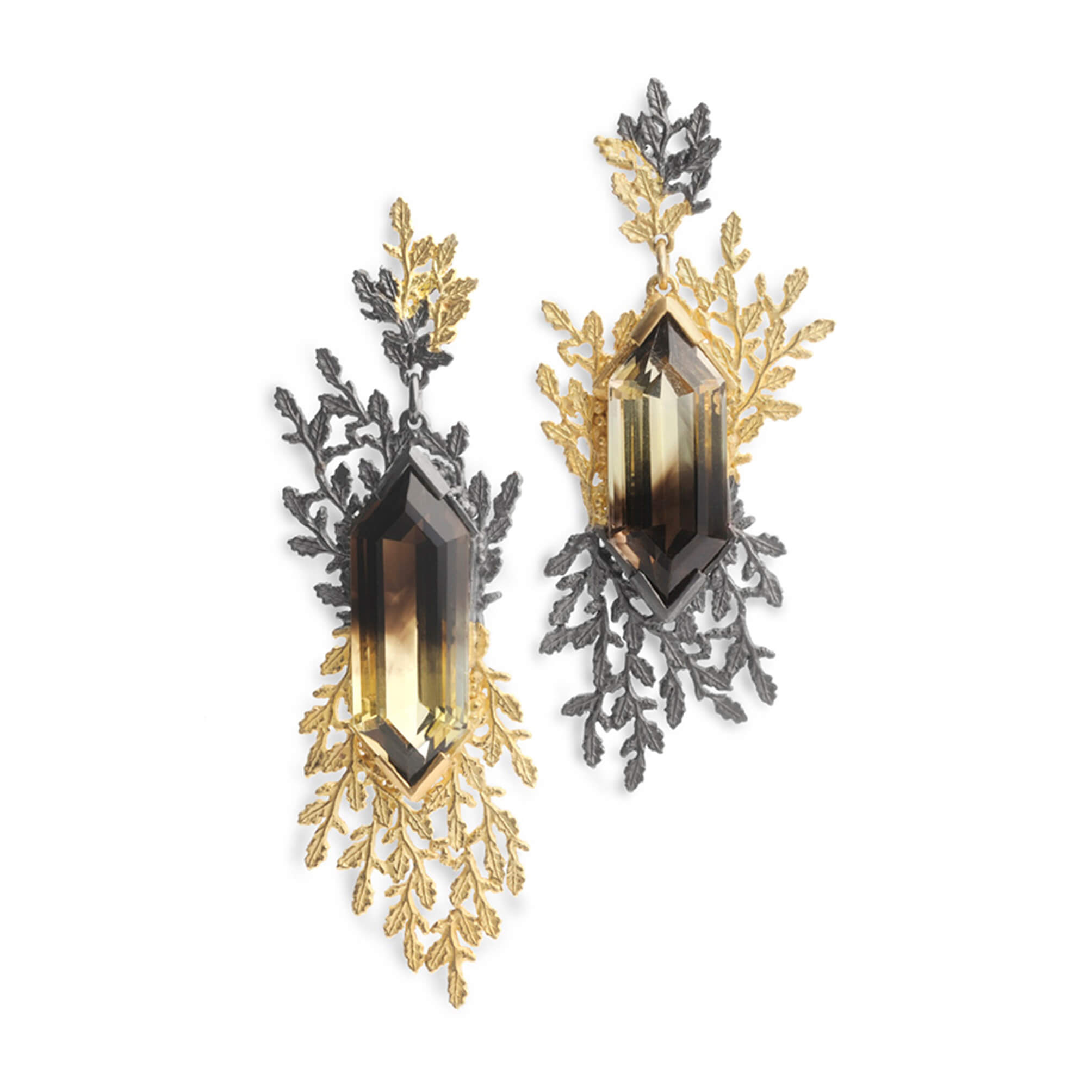 “Playing with contrast, Beth’s earrings achieve a sense of harmony and balance that brings out the natural beauty of the dichroic quartzes. The heaviness of the large stones is balanced by the lightness of the filigree-like gold leaves, part plated with black rhodium in keeping with the stones’ change in colour. Placed in opposite directions so that one earring is dark on top and light on the bottom, while its pair is the other way around, these earrings create an original asymmetry while maintaining a harmonious balance that leaves us in awe of nature’s beauty.”

Fabulous, aren’t they? Max will be receiving his prize of £400 for winning first place to help support his business as an artist jeweller. Kayo and Beth will both receive a copy of Fine Jewelry Couture: Contemporary Heirlooms by Oliver Dupon to serve as inspiration for their next work.

If you’d like to see the winning pieces and meet the artists themselves, Max and Kayo will be exhibiting at the Dazera exhibition 30 November – 2 December at The Exhibitionist Hotel in South Kensington alongside several other award-winning designers.

Add the event to your diary here