Ruth Tomlinson is the Creative Director of her eponymous jewellery brand. She has developed an internationally recognised luxury jewellery business from her central London based atelier which has associations with some of the world’s most prestigious names. She has been hailed with influencing a new generation of jewellers with her design aesthetic and ipseity.

Ruth graduated in 2001 with first class BA (Hons) degree in Three Dimensional Design from Manchester School of Art. After being selected to attend the Goldsmiths’ Company’s Getting Started course, she went on to study on the Bishopsland Post Graduate course and then was appointed as Artist in Residence at Edinburgh College of Art, going on to achieve an MA from the Royal College of Art in 2005. She subsequently was selected to participate in the Crafted mentoring programme run by Walpole British Luxury in association with Vacheron Constatin.

Above: Ruth Tomlinson in her central London atelier.

RT: I’ve been creating and selling jewellery creations since childhood with my first stockist being my family’s pharmacy. I went on to study 3-D Design in Manchester followed by an MA at the RCA which has led us to where we are today.

RT: Ethereal treasures filled with unexpected details and imbued with an otherworldy sense of a bygone era.

RT: I’m always looking for beauty and inspiration in the world around me. I’m very much a maker so the jewels really come to fruition during the making process when I translate my ideas into a tangible treasures.

RT: I like the thrill of the find, so I enjoy eBay or TK Max for that. I also love something beautifully crafted and unique – I’m lucky to have done some great swaps with talented  designers and makers, amongst my favourites are Matta NY for boho fashion using  textiles from India, Lucy Miller for handmade knitwear, Susy Harper for beautiful feminine designs, and Justin Ho for my Donegal tweed coat.

RT: My inspiration is drawn from both the mysteries of historical jewels and curiosities of nature. I love to observe and absorb my surroundings and I seek out the unconventional and unexpected beauty within. 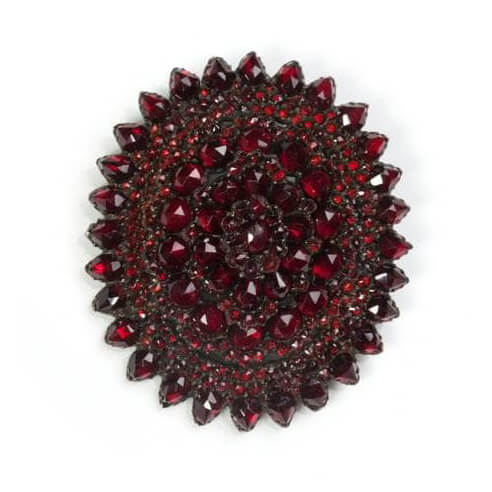 RT: Unfortunately we had all our family heirlooms stolen when I was young, so probably the first piece of jewellery my partner Gareth gave me – an original Bohemian brooch made with hundreds of tiny deep red garnets, the craftsmanship is incredible and it has a real sense of historical opulence to it.

What piece of jewellery do you most desire?

RT: A historical diamond ring from 16th or 17th century Britain or Europe.

Or a contemporary ring created by the wonderful Karl Fritsch.

If you could only be remembered for one thing in your working life, what would it be?

RT: A piece that means the world to one of our clients. Something with special symbolism that will be passed down and loved by generations to come, lasting the passage of time.

Above: Commissions for clients

What would be your advice to someone starting out in the industry?

RT: Keep learning. Listen to feedback from people and take their responses onboard. Stay true to your individual vision. Believe in yourself and just go for it!

Ruth and her team will be taking part in Cockpit Arts Summer Open Studios event, inviting visitors behind the scenes in the studios with the opportunity to buy work direct from Cockpit Arts’ master craftspeople and artist-makers

Ruth Tomlinson can be found at: