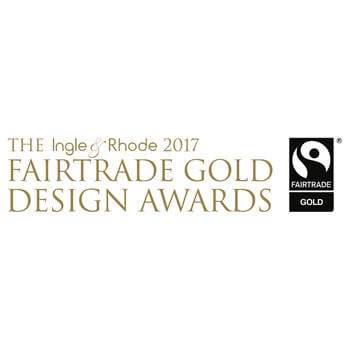 Created by ethical fine jeweller Ingle & Rhode with the support of the Fairtrade Foundation, the Awards aim to raise awareness of Fairtrade gold amongst people who are the future of the jewellery industry, whilst helping to identify and promote new up-and-coming talent.

Who Can Enter?
The Awards will accept entries in four categories:

How to Enter
Register for entry at www.ingleandrhode.co.uk/awards/ by Sunday 12th February 2017.

Judging and Assessment
Entries will be assessed on originality, creativity, presentation as well as practical considerations, and a shortlist of up to 20 finalists will be put to a public vote. Finalists will be able to rally support from their friends and family to help them win votes, but those who are not so savvy with social media will still be in with a great chance as a judging panel will award commendations to the designs they believe deserve special recognition, and will pick the overall winner.

So far, the panel of judges includes:

Awards and Prizes
Winners and commendations will be awarded in each category, and the overall winner will receive £500, and the opportunity of exciting work experience, which will include seeing their design transformed into a stunning piece of jewellery. Ingle & Rhode will create the winning design in Fairtrade gold and fully-traceable ethically-produced diamonds. The finished piece will be loaned to the winner to exhibit at their end of year show and/or the New Designers exhibition, before it is auctioned by Ingle & Rhode to raise money for the Fairtrade Foundation.

The four category winners, special commendations, and the overall winner, will be announced in April 2017.

About Ingle & Rhode Ltd
When David Rhode was looking for an engagement ring back in 2006, he couldn’t find a jeweller who could tell him where their diamonds had come from, or the conditions under which their jewellery was produced. The more he looked into the industry, the more compromises he discovered he was being asked to make. From blood diamonds, to dirty gold, to sweatshops and child labour. Together with his friend Tim Ingle, they launched Ingle & Rhode in 2007 to offer an ethical alternative to the traditional luxury brands.

At Ingle & Rhode, ‘ethical’ is not an optional add on. It is the single, defining standard that determines everything that goes into their jewellery. They use the finest quality materials, but only those that can be traced back to source, such as certified Fairtrade gold and Canadian diamonds.

As opposed to sweatshops or production lines, Ingle & Rhode jewellery is all made individually in the UK by craftsmen and women who are amongst the most respected in the industry.

Co-founder of Ingle & Rhode, Tim Ingle said of the competition, “Millions of people worldwide rely on small-scale gold mining to survive. Most of them work in harsh conditions with no health and safety regulations, and many of them do not receive a fair price for the gold that they produce. Fairtrade gold is vital because it provides small-scale miners and their communities in developing countries the opportunity for better living and working conditions. This is why it is so important that we raise awareness of Fairtrade gold amongst jewellery students, apprentices and those early in their careers. They are the future of our industry, and these Awards will provide them with a platform to publicise and promote their talent. We are really looking forward to seeing the designs from the next generation of Fairtrade jewellery designers.”

About the Fairtrade Foundation
The Fairtrade Foundation is an independent certification body which licenses the use of the FAIRTRADE Mark on products which meet international Fairtrade standards. This independent consumer label appears on products to show that disadvantaged producers are getting a better deal from trade. Today, more than 1.65 million people – farmers and workers – across more than 74 developing countries benefit from the international Fairtrade system.

Victoria Waugh, Gold Product Manager at the Fairtrade Foundation added, “The Awards are a fantastic way for future talent within the industry to work with metal that has the ability to empower miners and transform lives. Through Fairtrade, miners get a guaranteed Fairtrade minimum price and premium, and the Standards include strict requirements on working conditions, health and safety, handling chemicals, women’s rights, child labour and protection of the environment. What better way to combine exquisite craftsmanship with values, something that is increasingly sought after by luxury consumers.”

Hopeful entrants must register on Ingle & Rhode’s website by 12 February 2017 to take part, and then submit a design of a Fairtrade gold wedding ring, engagement ring or wedding band and engagement ring set by 12 March. The winners will be announced in April 2017. Prizes include £500, work experience and the chance to have winning designs made in Fairtrade gold.

Register now for the Awards
www.ingleandrhode.co.uk/awards