Turquoise Mountain was established in 2006 at the behest of HRH the Prince of Wales and they now work in Afghanistan, Myanmar and the Middle East. Turquoise Mountain, a British not-for-profit organization, aims to support traditional Afghan craft by connecting artisan businesses with designers and retailers across the globe.

This latest collaboration unites Sima Vaziry, an award-winning jewellery designer and maker based in London, with Afghan jewellery businesses based in Kabul. Afghanistan’s population is made up of several ethnic groups or tribes. Despite these tribes collectively residing in the region for hundreds of years they each have their own distinctive ways of living, defined by unwritten codes. It is this variety across these cultures, and especially in their embroidery, that has inspired this collection. It was important for Sima that a female voice and viewpoint should be used as her inspiration; partly to tell the story of another side of Afghanistan, but also to celebrate the creativity and skills of these Afghan women. Embroidery is a craft that women have traditionally used to express themselves across the world. Stories are told, love is demonstrated, and creativity is encouraged and admired. The Alina collection, named after a popular Afghan woman’s name, takes embroidery motifs such as stars, flowers and petals combined with Afghan semi-precious stones such as Lapis and Turquoise to create an authentic and stunning collection. The highlight of the collection is the Afghan Tribes Peace Brooch which features charms that represent the different tribes. 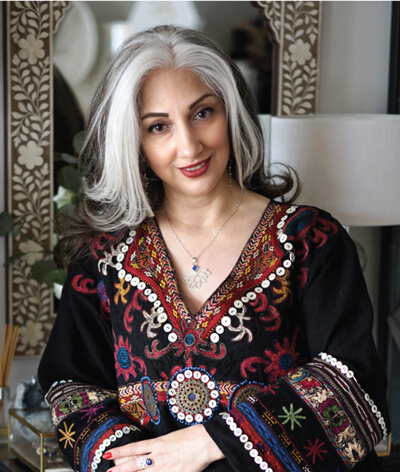 used on the cover of the book, “Silversmithing for Jewelry Makers”.