This spring saw a successful collaboration between the Louisa Guinness Gallery and jewellery designer Cora Sheibani resulting in an inaugural solo show which previewed in London, New York and Geneva. 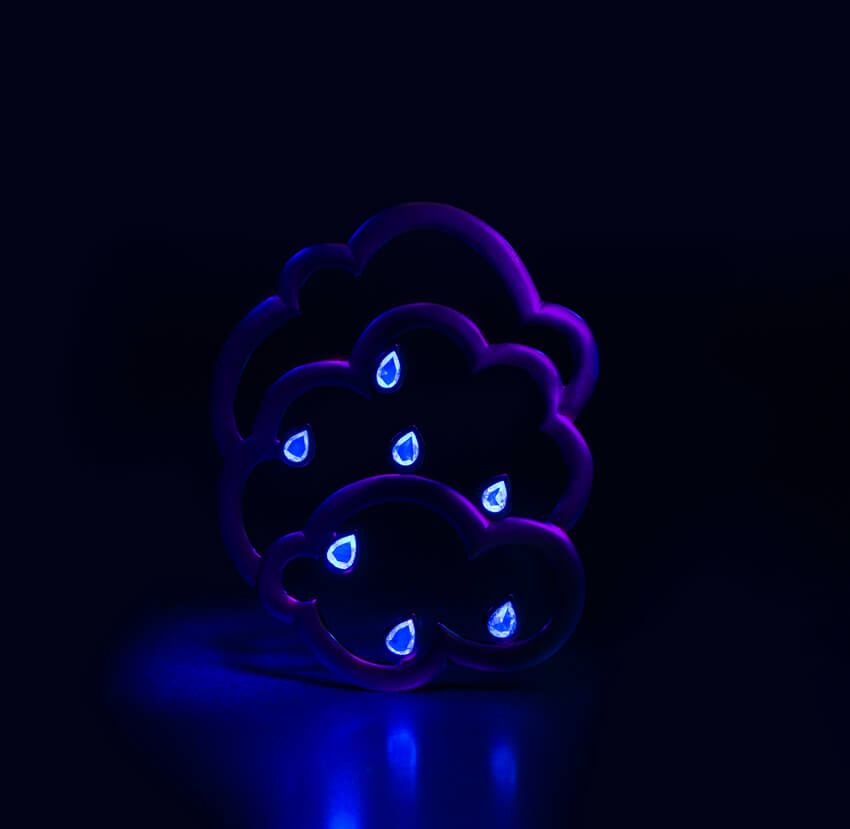 The ‘Glow’ exhibition aimed at being a celebration of fluorescent gems: stones that have an incredible and unusual property of glowing in a different colour whilst exposed to ultra violet (UV) lighting. As part of the exhibition set up part of the gallery space was transformed into a site-specific installation, which presented viewers with a dark wonderland in which they could explore each unique piece of glowing jewellery alongside amazing fluorescent and phosphorescent minerals. 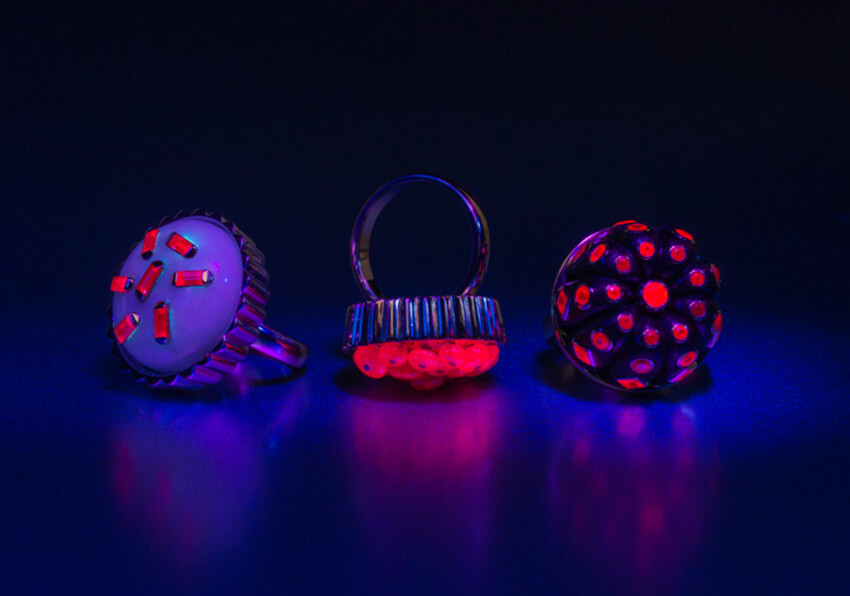 ‘Fluorescence and phosphorescence are a significant characteristic of certain gems, a quality that is often overlooked but I believe should be used as a design feature,’ says Sheibani. 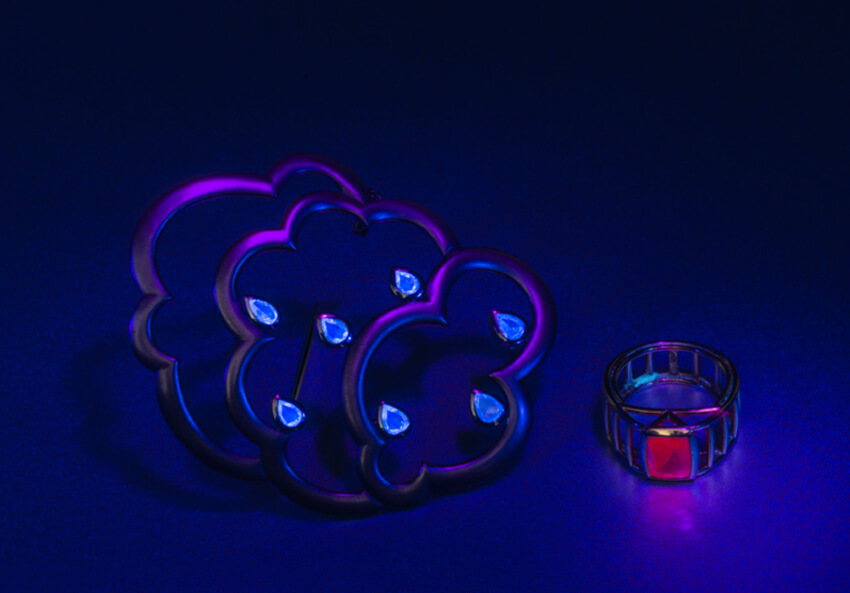 For the past year, Sheibani had been on a hunt for fluorescent gemstones. Some of these have been used to make fluorescent versions of previous designs and others to inspire her to make new designs. Although there are many minerals that fluoresce or phosphoresce, only a small number of durable gems show these special properties. Fluorescence is the phenomenon of colour change caused by the exposure to UV light. Phosphorescence means that this change continues to be seen for a certain period beyond exposure to UV light. All pink and red spinels, rubies and pink sapphires fluoresce an intense red colour. A small number of yellow sapphires turn orange and only a few blue sapphires can turn red. Brown diamonds usually fluoresce white and most yellow and white diamonds fluoresce blue when exposed to UV light. On Instagram she discovered that the most intense pink spinels from the Mansin mine in Burma are called “Jedi” spinel by the local dealers as they exhibit such strong fluorescence it reminds them of the lightsabers in Star Wars! 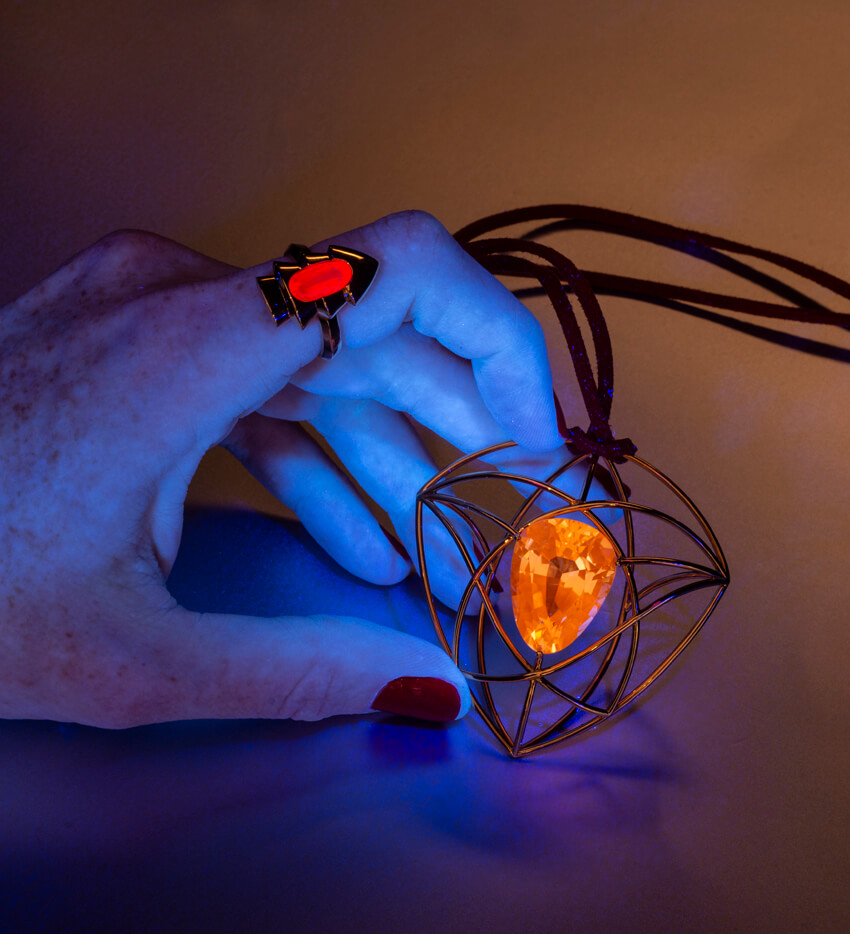 When it comes to diamonds, according to the GIA, 65-75% do not exhibit any fluorescence. In the past 40 years diamond dealers in the west have increasingly viewed fluorescence as an impurity that affects the gemstone’s price. According to a GIA study in 1997, “the average person could not make the distinction between a diamond with fluorescence and a diamond without”. However, Sheibani finds fluorescence to be a positive quality that adds an interesting and hidden dimension that makes it more unique.

For the exhibition Glow, all of the jewellery was designed with special consideration given to how the colours will appear in both normal and UV lighting. The Glow jewels have an extra dimension to them that can be cherished by the wearer and enjoyed at will, with the help of a light. 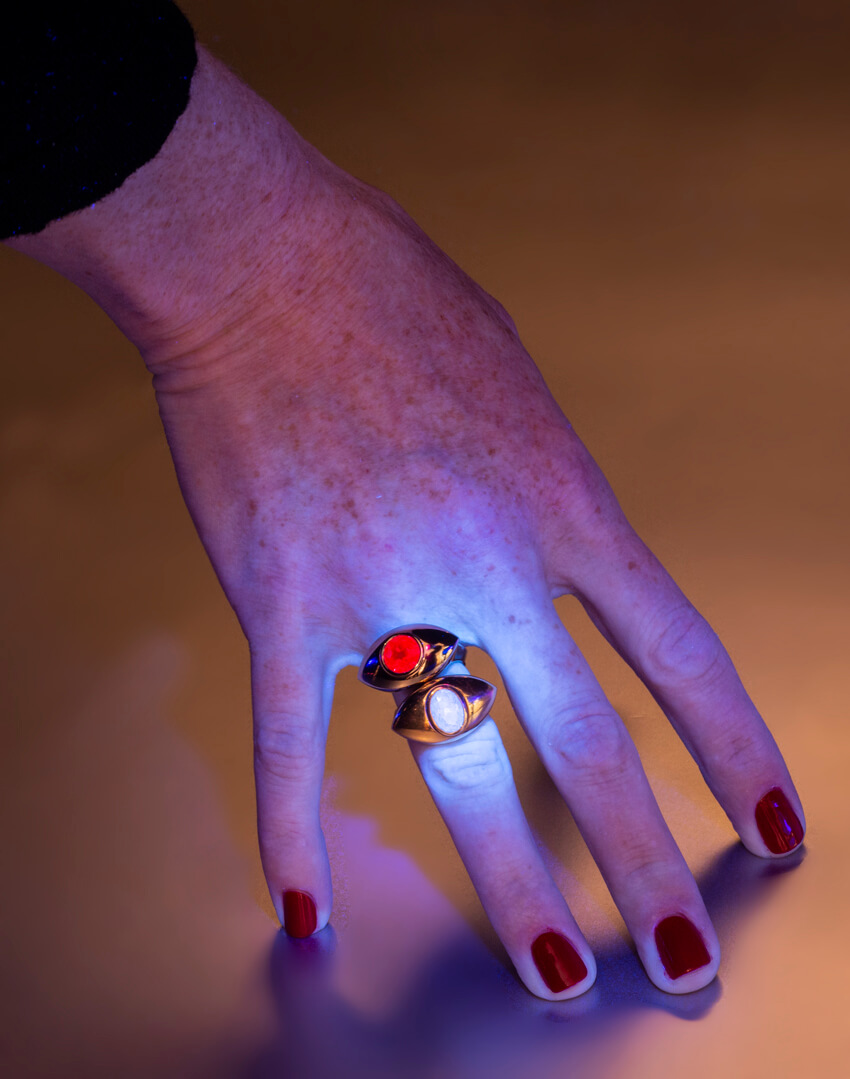 Cora Sheibani was born on in 1980 to Christina and Bruno Bischofberger, a prominent art dealer in Switzerland. From an early age, she benefited from an environment dedicated to modern and contemporary art and design. She received an Art History degree from New York University in 2001. She lives in London with her husband and three children. In 2001, whilst studying at NYU, Cora Sheibani decided that she wanted to design jewellery and started her first jewellery sketchbook. In the summer of 2002 she completed a degree in gemmology from the GIA in London. In December 2002, she launched her eponymous jewellery label at an exhibition in London’s Mayfair. Cora Sheibani’s pieces are almost exclusively made in Switzerland, France and Germany, by goldsmiths of the highest calibre and has exhibited her works in cities including London, Zurich, Geneva, Basel, St.Moritz, Paris, Copenhagen, Miami, Milan and New York. 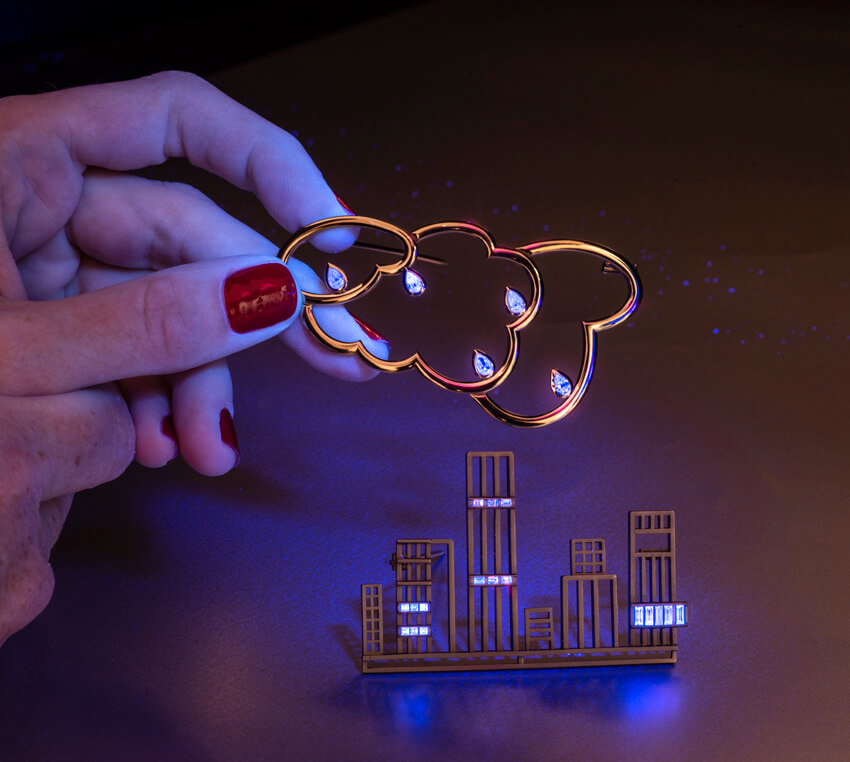 In Sheibani style, the works are completely design driven and manufactured to the highest quality, mostly in Switzerland, but also in France, Germany and the United Kingdom. Her unique works are either abstract or inspired by playful objects with interesting shapes and infused with her love of colour. Upon reflection, Sheibani feels that it is perhaps her passion for colour that led her to explore and bring to the foreground the neon side of certain gemstones. She had designed brand new works for the exhibition and has also created a selection of new pieces including her cupcake rings, rain cloud brooches and flowering cacti bracelets relating to her previous collections. A section of the exhibition was designed to resemble a mini retrospective of her works of the past 15 years, enhanced by a neon glow. A brooch inspired by skyscraper blocks sat neatly beside another resembling a rain cloud; both of which included glowing blue diamonds, representing windows and rain.

‘I am really thrilled to present this exhibition of Cora's work. I have long been an admirer of her style and design skills and am a collector of her work myself. The time and care she puts into the production of each piece is exemplary and the quality speaks for itself.

I love the playful designs which use vintage copper cake moulds and ice cream cones as subject matters, I adore the clouds with rain drops of diamonds sprayed across the facade. The wire cage rings and pendants which imprison bright gemstones, the pretzel gold chain, the frame brooches, all such simple subjects but depicted so elegantly in original yet timeless design.

We look forward to inviting our clients to the gallery to explore our own version of Aladdin’s cave and discover the beauty of Sheibani’s gems and treasures.

I have mostly worked with artists who are painters or sculptors; this solo exhibition adds a new layer to the gallery by extending its following and representation. With this exhibition we represent a young talented designer who speaks through her jewellery as an artist might otherwise do on canvas.’ 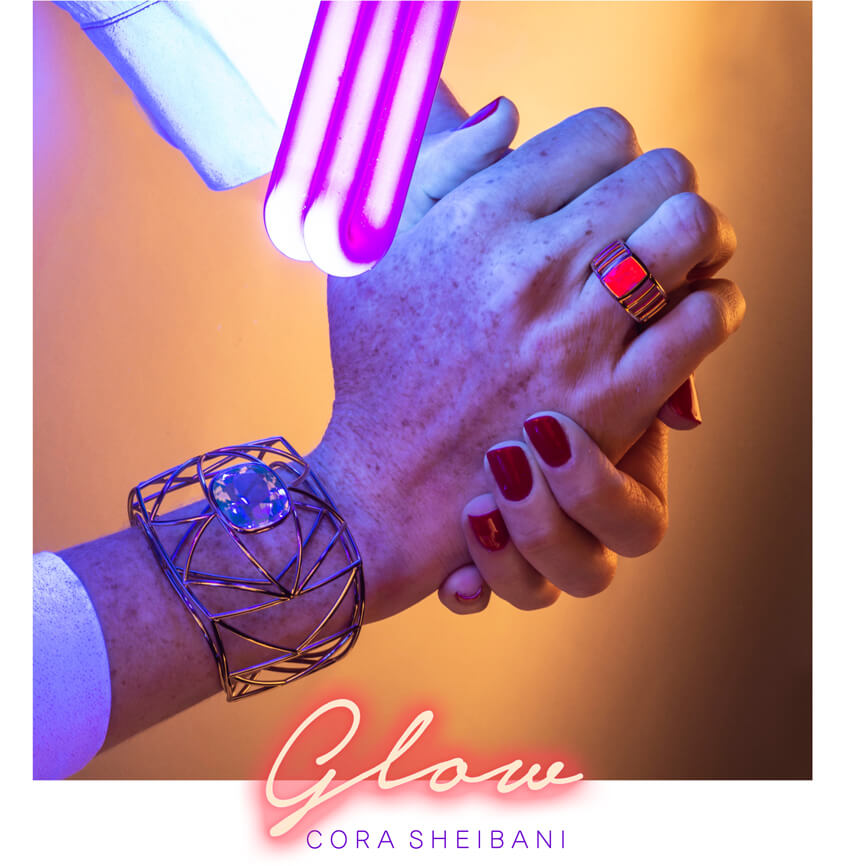 In May the exhibition travelled to New York and was presented alongside a selection of Louisa Guinness Gallery artist jewellery in the Colnaghi Gallery. The New York exhibited new pieces and highlights of the work as well as pieces by Alexander Calder, Lucio Fontana, Jeff Koons and Anish Kapoor.