After graduation he started his professional career in the retail business and joined the Co-operative Midcounties where he worked as a Department Store Manager until 1988. As a brief spell as a Training Consultant he joined the British Independent Retailers Association (BIRA) as saw a very speedy transition into management, and Executive management level.

Furthering his interest in both training, retail and trade bodies, he was appointed a Non‐Executive Director of National Association of Colleges in Distributive Education & Training which he remained in post for ten years until the early noughties, and additionally a Non‐Executive Director Distributive Industries Training Advisory Council until 2003.

Michael left BIRA to join The National Association of Goldsmiths (NAG) as Chief Executive Officer and Company Secretary after gaining a wealth of experience and headed up the jewellery trade membership organisation from its Luke Street, London EC2 premises.

At the time, the NAJ, which had been formed in 1894, was a jewellery trade association in the retail jewellery space which represented some 1,400 businesses with around 2,500 stores, in a market worth about £5bn.

Within the jewellery industry in this pivotal role, Michael ran the organisation which had an important role to represent the retail jewellery industry to consumers, the media and government whilst providing its membership with services such as events, publications, interest groups and education. 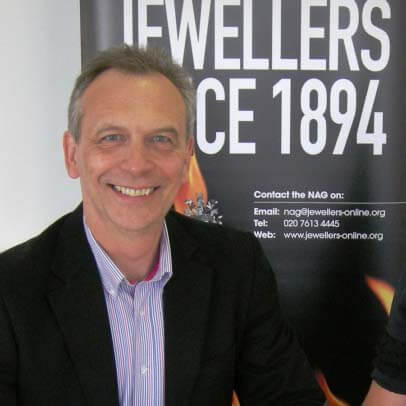 During Michael’s tenure at the NAG he ensured that it was at the cutting edge of environmental issues within the industry aligning it with the CIBJO and the International Jewellery Federation. In 2005 Michael was a founder of the now mainstream organisation the Responsible Jewellery Council, which at the time was ground-breaking and remained a Non‐Executive Director.

The organisation had an international outlook, was founded as not for profit, and at the time aimed at setting standards across the

jewellery industry consisting of 415 member companies across the jeweller supply chain. A founding principal of the organisation was that RJC Members should “be committed to promoting responsible ethical, human rights, social and environmental practices in a transparent and accountable manner throughout the industry from mine to retail.”

Michael also pushed on initiatives like SaferGems, a national intelligence sharing initiative to counter crime in the Jewellery, Antiques and Fine Art Trades, and formalised the Institute of Registered Valuers (IRVs) of which the NAG acted as lead organisation.

In 2013, after a thirteen year stint at the helm of helping shape the industry through the first wave of digitisation and ethical minefields, Michael stood down from the NAG to take a freelance consulting role advising on Strategy, Communications, Public Affairs which would ease him int semi retirement.

On social media personalities within industry have expressed their condolences

Willie Hamilton, Mentor at HamiltON Business. Chairman RSPCA Assured. Chairman Horsham BID.:
Michael was the first person in the Jewellery Trade(outside of CMJ) that I met. Michael was so welcoming, supportive and a great ambassador for NAG. I thoroughly enjoyed his company, advice and friendship whilst we worked together to bring CMJ & NAG closer together,,,,, great times and a great man. He will be missed by many, but also fondly remembered and respected by many too. My condolences go to his family and everyone who fondly remembers him.

Simon Rainer:
A sad loss! I remember Michael with fondness - a sparkling (risque!) wit and an excellent supporter and contributor to the UK jewellery industry. He will be missed and many condolences to family and friends. RIP Michael.

Simon Forrester, NAJ Association Leader:
Michael was a true gentleman, one of the old school of association leaders who worked tirelessly for his industry, while never taking himself too seriously. I first met him as President of the Institute of Association Management, and he encouraged me to join the Board.

Julie Driscoll, UK Regional Director Hyve Group PLC at Hyve Group plc
I am very saddened and shocked by this news. I spent a considerable amount of time with Michael when he was running the NAG. He was brilliant fun and a great storyteller.

Edward Johnston:
I am saddened to hear the news today of the passing of Michael Hoare, the long-serving CEO of the National Association of Goldsmiths and friend to many in the trade in the UK.

Pravin Pattni, Company Director at Pravin A Pattni Limited:
Michael will be really missed as I knew  him as a very intelligent and excellent CEO of NAG during my association.

Nicky Valentine, Sales & Marketing Director at The Orange Square Company
I’m very sad to hear this news. Michael was an incredible force within the jewellery trade. So generous with his time, a genuinely lovely character who has left a huge gap to fill.

He was a Freeman of the Worshipful Company of Goldsmiths and of the City of London.

Micheal lost his battle with cancer in mid April and is survived in Oxford by his wife Anne and two sons, including Miles, who has also worked in the jewellery industry.