The Nature of Silver exhibition at Goldsmiths' Fair 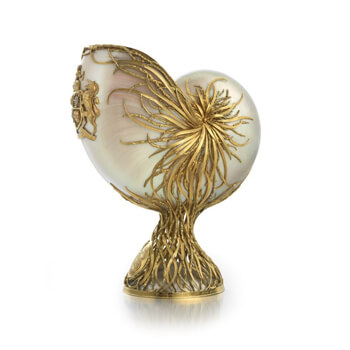 The Nature of Silver exhibition at Goldsmiths' Fair

Exhibition of silver treasures from the Goldsmiths’ Company Collection puts the spotlight on innovative historic and contemporary silver inspired by nature.

The annual Goldsmith’s Fair is the premier selling exhibition for the latest in fine jewellery and contemporary silver from the best goldsmiths and silversmiths across the UK.

This year, Dora Thornton, Curator of the Goldsmiths’ Company Collection, has delved into the collection to create a fascinating special exhibition of rarely seen historic and contemporary silver inspired by nature.  These unique treasures (not for sale) share organic and natural origins and challenge viewers’ ideas of the creative potential of precious metal.  At the same time, each piece presented a unique challenge to craftsmen to innovate and adapt techniques to realise the final designs.  This extraordinary display of creativity and expert craftsmanship serves as a reminder of what is possible when inspired artisans employ traditional and modern techniques to achieve their visions.

The Nature of Silver explores the inspiration of nature on artist-makers in silver, and considers the intrinsic qualities of a metal which is found in its free elemental form in the Earth’s crust. The pieces displayed show how silver offers endless potential in terms of form, texture and finish.  Some examples from the exhibition include the following:

Gerald Benney’s cup [1961], with its textured gilded chevrons edging half a coconut, translates a traditional drinking vessel into a modernist idiom.

David Thomas’s nautilus shell cup [1968] is a jewel in which chased seaweed-like strands follow the curves of the shell and flow into the foot.

Inspired by the horns of the Artic narwhal which washed up on beaches, were traded to Europe as talismans, and were said to be horns of the mythical unicorn, Louis Osman’s fascinating balance was commissioned by the Goldsmiths’ Company in 1963.  It recalls the role of the Assay Office in the testing of precious metals and the unicorn supported on the Company’s arms. Fitted with a rose quartz weight and jewelled counterweight, the piece combines modernist architectural rigour with medieval fantasy. Shells and sea creatures are a constant source of fascination to silversmiths.

Nan Nan Liu’s oyster shell box [2012] is built up from soldered layers of metal to suggest growth rings while the flowing engraved patterns evoke the shell’s relationship to ocean tides.

Junko Mori’s Organism [2005] is built up from hand-forged elements welded together to form a sea anemone as table sculpture.

Gerald Benney’s witty, spiky crustaceans [1957] made from folded origami-like silver will be instantly recognisable to anyone used to prawning.

Sheila McDonald’s Shetland Bird vase [2013] conveys the imagery and texture of a whole landscape: etched cliff faces with wheeling seabirds built up in layers of blackened and gilded enamel.

Hiroshi Suzuki’s delicately hammered and chased vases translate the force of wind and wave into abstractions. The pale translucent enamelling over matte texturing on his most recent Seni vase [2018]  suggests the shadowed troughs and burnished ridges of a moving sea.

Quieter and denser are the hammered textures built up from banks of seeds on Junko Mori’s Hedgerow Cups [2017].

Finally, Michael Lloyd’s delicately-chased cups [2006-13] express his desire to take “an inanimate material, and bring it to life in a form or image that will sing out; that desire to pay homage to my surroundings, to my creativity; that thanksgiving to that first bite into the apple of awareness…And what of the work? It is simply my response to cherished observations.”

It is through such exquisite works in precious metal that The Nature of Silver takes us inside the imagination of makers and collectors.