Adornment has the pleasure to present, on the occasion of the New York City Jewellery Week, a special edition of Cutting Edge, an exhibition of jewellery design and research into glass, first announced in Venice within the Venice Glass Week. 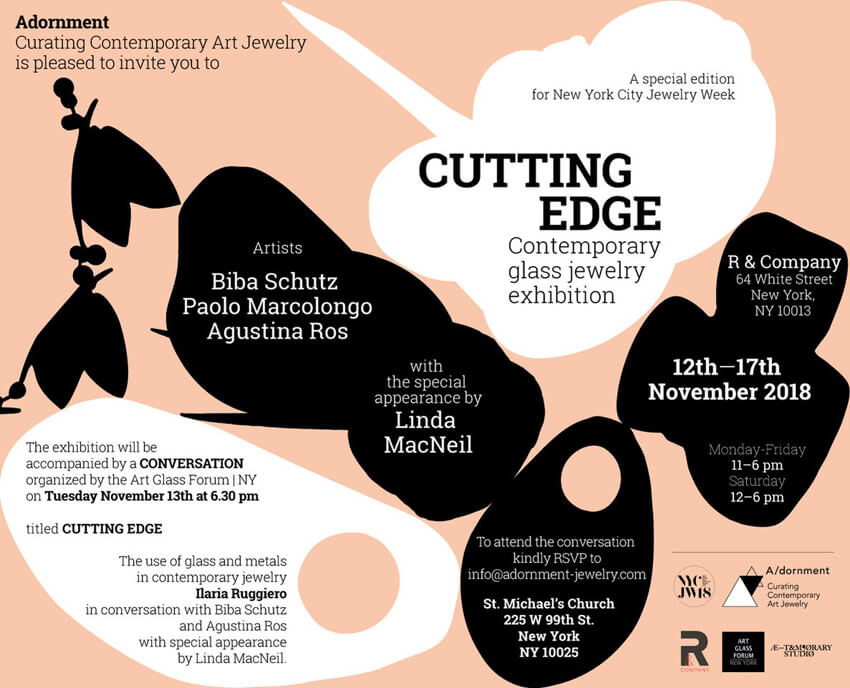 The exhibition will be held in the revolutionary spaces of R & Company on 64 White Street, a showcase for global modernism spanning two centuries and focused on the future of design, from 12th – 17th November 2018.

Cutting Edge – Contemporary Glass Jewellery exhibition presents the creations of artists and designers who use glass as a vehicle of expression and who stand out for innovation and personality.

On view the works of Paolo Marcolongo, Biba Schutz and Agustina Ros, in an open dialogue with many voices, in which talent, vision and technique are balanced in exclusive virtuosities. Within this special edition for the New York Jewellery Week, some masterpieces made by

the special guest and ambassador in the field of glass Jewellery Linda MacNeil will be included. The selection aims to provide an unusual and avant-garde perspective on glass jewellery, an

affirmation of the identity of research that is today increasingly independent, even if still connected, to tradition. Various processes and techniques are used, then personalized by each of the creators by way of experimental techniques: from working with Murano glass, to the processing of handblown borosilicate glass; from the joining and mixing of several chemical components, to the combined processing of glass and metals. 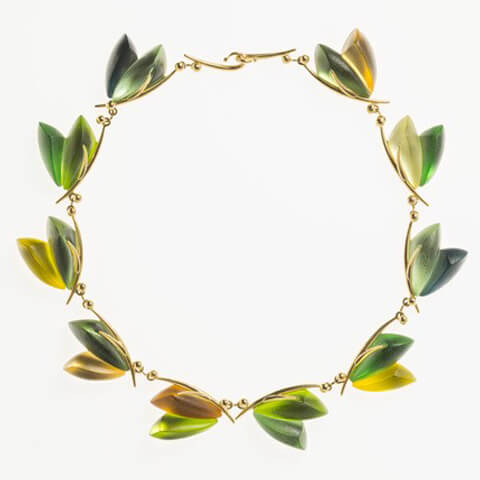 The exhibition will be not only an opportunity to see some masterpieces in glass, but an exploratory journey which considers the aesthetic and technical variety of the possible uses of metals and glass together.

In the jewellery of Linda MacNeil, for example, metals (both precious and non precious) and glass have equal dignity and function. Both are designed and made to compose a unity of shapes, geometry and visual rhythm, function and decoration; both convey a single perfectly balanced result. A little like a dance, a waltz - the first dance in history that allowed a pair of dancers to embrace - so, in Linda's creations, metal and glass embrace to form a single rhythmic circular decorative movement.

In Biba Schutz, metal contains and supports, with ample circular harmonic movements, it has an almost maternal, containing, protective function. The glass lies down and rests on silver plates, escaping gently and softly with free and discontinuous movements. Glass blowing gives the forms a natural variability and uniqueness.

Agustina Ros, on the other hand, sublimates the two identities, metal and of glass, to create a single material characterized by both chemical components. In this case the metals, even something as precious as gold, become functional to the nuances of the glass, accessories, losing their original consistency, to merge completely and become something different.

The exhibition will be accompanied by a conversation organized by the Art Glass Forum, which will be held on Tuesday November 13th at 6.30 pm at St. Michael’s Church and titled:

Cutting Edge - The use of glass and metals in contemporary jewellery
Ilaria Ruggiero in conversation with Biba Schutz and Agustina Ros with special appearance by Linda MacNeil.

Linda MacNeil has been a pioneer in both the Studio Jewellery and Studio Glass movements since the 1970s. Committed to art at an early age, MacNeil studied at the Philadelphia College of Art and the Massachusetts College of Art, where she was introduced to glass and her future husband, Dan Dailey. She received her B.F.A. from the Rhode Island School of Design in 1976.

MacNeil has always enjoyed mixing metal with other materials. She began experimenting with acrylics and then ebony and ivory, but by 1978, following Dailey’s lead, she became intrigued with Vitrolite, an architectural glass popular in the United States from the 1930s through the early 1950s.

Rejecting all conceptualism and narrative form, her attention is fully oriented to the forms and shapes, and the dialogue between them. For this reason Linda always begins her projects with sketches, with an approach that is typical of designers, expressing a maximum rationalism in both aesthetics and function. It is no coincidence that she is internationally known for her clear inspiration from Art Deco and the jewels of René Lalique, who historically achieved the highest levels of technique and quality in his work with metal and glass.

In addition to her stated deep bond with Art Deco, her creations live within an infinite world nurtured by inspirations, quotations, intermixtures, historical and ancient stimuli, which are then expressed through her personal language, both imperial and royal, in which primitivism is mixed with the geometric and symmetrical minimalism typical of the rigorousness of the early 20th century.

If, for example, she maintains, especially in some series such as Floral, a marked attention to the typical Art Nouveau decoration of the late 19th century, the clean lines and artistic shades of the glass refer to early twentieth century abstraction, in which shape becomes the ultimate expression of universal and symbolic beauty.

Upon graduation, Linda MacNeil started exhibiting her work in commercial galleries and she has since shown in many distinguished galleries including Heller Gallery, New York; Habatat Galleries, Florida; Hawk Galleries, Ohio; Leo Kaplan Modern, New York; and Imago Galleries, California. Her work has also been featured in American Craft, and major articles have appeared in Neues Glas, and Metalsmith. MacNeil’s metal-and-glass sculpture and jewellery has been acquired by several prestigious museums, among them the Metropolitan Museum of Art, New York; Victoria and Albert Museum, London; Renwick Gallery of the Smithsonian Institution, Washington, DC; Museum of Fine Arts, Boston; Detroit Institute of Arts, Michigan; and the Mint Museum of Craft and Design, Charlotte, NC. In addition, MacNeil’s artistic accomplishments have been recognized by both the Massachusetts Council on the Arts and the National Endowment for the Arts.

Paolo Marcolongo, artist, gallery owner, a complex man with a unique and multifaceted inspiration, is one of the most significant representatives of the Scuola Orafa Padovana.

In his jewellery all the complexities of the numerous sculptural, artistic, philosophical and aesthetic references that characterize his creative evolution find a compendium and perfect balance.

His long-standing collaboration with Maestro Paolo Cenedese ensures glass of outstanding quality. The craftsman articulates his personal language without any simplistic or reductive attitude, even in his most minimalistic works.

The complex relationship between metals and glass develops in both the construction of the pieces and in the aesthetic results. Workmanship techniques belonging to the glassmaking tradition and the goldsmith's art are combined in order to achieve unique and incredible results.

An ancestral, mythological, almost archetypal dialogue between colour, transparency, weight and form. Nature blossoms in both its sensuality and danger, on the one hand expressed by precious metals which are at times stinging, sharp, edgy, thorny, on the other in the feminine voluptuousness of the softness of glass that explodes in a tormenting struggle for freedom. Born in Padua in 1956, he attended the Art High School "Pietro Selvatico", and then he studied sculpture at Venice Art Academy. From 1984 to 1996 he taught Plastic Arts at "Pietro Selvatico"

school, and since 1996 he teaches the same subject at Padua Art State School "Amedeo Modigliani". From 1996 to 1998 he was the curator of "Pd 362", an Art gallery of contemporary jewels in Padua. From 1998 to 2005 he was the curator of the "Marcolongo Gallery" of Applied Arts in Padua. Since then he worked as both curator and artists by curating several exhibitions and attending many international solo and collective shows.

Biba Schutz is one of those artists who has no need to deepen the analytical phase of her creative process. Her intuitive ability and emotional approach to work allow her to achieve incredible results. During the course of her evolutionary journey, Biba has experimented with a range of materials, searching for a balanced dialogue between form and content, construction and meaning.

With the aim of creating sensual and liquid sculptures, she has dedicated herself to developing the most elegant, simple and balanced ways of combining metal and glass. The union and the combination of these two materials always leads to outcomes of extreme contrast: the softness of rounded glass against the hardness of metal, the heat of the colours and the rhythmic and undulating movement of glass, against the coldness of the grey metal that in its own way contains, collects.

Cutting has a specific importance and relevance in her work. In addition to always being executed with care and precision, finished in the smallest details, it creates that particular movement and global appearance of her jewellery that makes it unique. The alternation of full and empty forms, of openings and recesses, offers a modular and sensual rhythm, like an abstract, fluid, liquid lunar landscape.

Educated as a graphic designer and printmaker, Schutz has been a full time practicing, self-taught studio jeweler and object maker for more than 25 years. Born in Brooklyn, living and practicing her craft in Manhattan, the city reflects in her voice. Though Made in NYC, Schutz is represented by galleries and fairs throughout the USA and internationally. Schutz has taught at Penland School of Crafts and IED, Milan as well as been a presenter at SNAG & COMA conferences. She has received the Eric Berg Prize, Adrianne Farelli Prize as well as many Awards of Excellence. Schutz is published in many jewellery books and periodicals including an artist profile in Metalsmith magazine and American Craft magazine. In 2014, she was the recipient of an Artist Residency at The Corning Museum of Glass followed with a solo show at Sienna Patti Contemporary. In 2016 Schutz was selected to participate in the International Schmuck exhibition in Munich. Schutz’s works can be found in public and private collections around the world including the Racine Art Museum, WI, Renwick Gallery of the Smithsonian American Art Museum, Washington, DC, the Newark Museum of Art, NJ, Boston’s Museum of Fine Art, MA, the Rotassa Foundation, Mill Valley, CA and the Corning Museum of Glass, NY.

Agustina Ros is a young and promising glass jewellery artist who combines the sensitivity of art and the resolution of design. Born in Misiones, Argentina, she currently lives in Barcelona, the city where she has chosen to open her own studio with an international vision.

Focused on the use of blown borosilicate glass, some pieces are then finished with metals such as gold and silver, and polished to improve the reflection of light.

Her hungry desire to experiment, create and improve has already led her to receive several awards and to affirm the presence of her collections in international and creative contexts. Her creations are flexible interpretations of clean and organic forms, in which transparency represents the values of purity and originality.

In Gold Reflection she has experimented by vaporizing precious metals, in this case gold, onto the glass in order to obtain a golden reflection in graded tones onto the colour of the piece itself. The contrast of the colours and the chemical effects resulting from the vapors leads to a final effect similar to that of mirroring.

Agustina Ros was mainly trained by Ferran Collado and Francisca Kweitel. On 2015 she was selected as EMERGENT DESIGNER of “PURO DISEÑO”, the most important design event in Argentina 2015. She won various scholarships at The Corning Museum of Glass and Urban Glass, both in New York, where she had the occasion to learn from artists such us Simone Crestani (ITALY), Amy Lemaire (USA), Suellen Fowler (USA), Jason Chakravarty and Joe Upham (USA); Paulina Cambalova. On 2017 she was winner of the ENJOIA`T AWARDS 2017 in the professional category. The winner piece ¨Reflection Ring¨ is part now of the permanent collection of the Museum of Design HUB and AFAD association in Barcelona.Her work is travelling worldwide among different international exhibition and competitions such as: the 4th Triple Parade Biennal of Contemporary Jewellery, Shanghai (2018), Artistar February 2019, Melting Point Valencia 2018, INDEPENDENT Gallery June 2018, Cutting Edge during Venice Glass Week 2018.